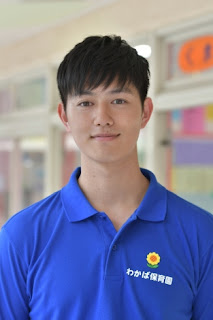 Kudo Asuka will be appearing in the TBS Summer 2017 drama "Kanna-san!" starring Watanabe Naomi which will begin its run from 18 July in the Tuesdays 10pm timeslot. The drama is based on the same-titled manga by Fukaya Kahoru serialised in manga magazine "YOU" between 2001 and 2007 and features Watanabe as a fashion designer Kanna. Although she has a handsome husband Rei, Kanna discovers that he is having an affair and she also has to cope with her difficult mother-in-law. At work, she is bullied by her unreasonable boss. Despite these daily challenges in life, Kanna tries her best to live positively for the sake of her beloved son Reon.

Kudo plays the role of Aota Sousuke who is a handsome teacher at the nursery where Reon goes to and very popular with his students and their parents. He is a good confidante of Kanna who gives her the strength and encouragement she needs.

It was announced that Jiro of the comedic Sissonne who is Watanabe's senior, will be playing the role of Katagiri Yuta who is a colleague of Kanna's husband Rei (Kaname Jun) and admires the latter like an elder brother.