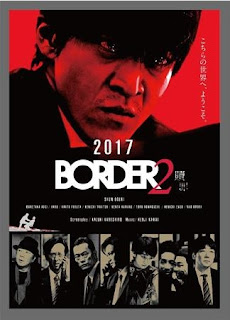 Oguri Shun will be back in the drama SP sequel to TV Asahi Spring 2014 drama "BORDER" written by Naoki Award-winning writer Kaneshiro Kazuki which will be shown within 2017. The drama SP titled "BORDER 2 Shokuzai" (BORDER 2 Atonement) continues from the end of the drama series where Ishikawa Ango (Oguri) gets too caught up in his pursuit of justice that he pushes a criminal Ando Chikao (Omori Nao) over from the rooftop of a building. Although Ando is supposedly dead due to the fall, he appears suddenly behind Ishikawa and grabs his shoulder to welcome him to the other side of the world i.e. evil.

It was revealed that the drama's ending was actually not supposed to be the real ending to the story and that a sequel project was already in the works then. The drama SP will describe what happens to Ishikawa and Ando after that ending and the meaning of the sub-title "Shokuzai" will also be explained in the story.

Besides Oguri, the original cast members including Aoki Munetaka, Haru, Endo Kenichi, Furuta Arata, Takito Kenichi, Nomaguchi Toru and Hamano Kenta and guest star Omori will be back in the drama SP.

To commemorate the drama SP's launch, the drama series will be shown for free via on-demand services TV Asahi Catch-up, TVer and GYAO! from 14 June at 5am to 18 June at 11.59pm. By typing the search keyword BORDER on Yahoo! JAPAN, there will be a special video available for viewing which describes Ishikawa's journey so far and some parts from the sequel. Information about the sequel will also be released via its official Instagram and Twitter pages gradually.

Sources: Sanspo / My Navi News / Oricon / The Television
Posted by Chiaki at 10:19 PM

Hmm... I'm not keen on the sequel as I liked how the drama ended with a bang, but will watch it hoping for it to be good. I can kind of guess what is likely to transpire, if they're going to name it Shokuzai. The episode titles have been quite revealing in that regard. Still, I guess it'll be nice to see the return of the BORDER cast, Oguri Shun was fantastic in that drama and everyone else was generally sold.

I mean everyone else was generally solid, ha. What a typo to make.