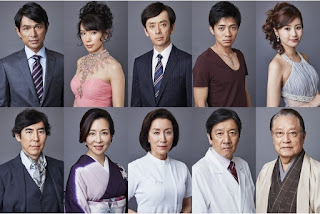 The supporting cast line-up of TV Asahi Summer 2017 drama "Kurokawa no Techou" has been announced. The drama which will begin its run from 20 July in the Thursdays 9pm timeslot, is based on Matsumoto Seicho's famous same-titled novel and features Takei Emi as the lead character Haraguchi Motoko who was a contract bank employee stuck with a huge debt chalked up by her mother after her father passed away. In order to repay the debts, she works part-time at a nightclub in Ginza. Just when she has finished paying her debts, she gets news of her impending retrenchment by the bank. Motoko then makes up her mind to leave the bank and embezzles JPY 180m from her employer which is used to open a high-class club Carnet. With the list of dummy bank accounts of the rich and famous which she acquired from her previous job and recorded in her black notebook, Motoko rises up the ranks in the world of darkness filled with love and desire. As Takei is turning 24 years old this year, the Motoko in this new drama will be set as the youngest mamasan to date in Ginza's history at 25 years old.

Eguchi Yosuke will be playing the role Yasujima Tomio who is the secretary of a member of the House of Representatives and harbours the ambition of becoming a politician. However, due to his meeting of Motoko, his fate is changed drastically. This will be the first time in 5 years since Eguchi and Takei are working together since 2012 FujiTV drama "Iki mo dekinai natsu". Naka Riisa who is appearing in her first TV Asahi drama, will be playing the role of Yamada Namiko who used to be Motoko's colleague at the bank, was the one who invited her to become a hostess and later becomes her rival. Takito Kenichi will be playing Murai Toru who is the assistant manager of the Setagaya Kita branch where Motoko and Namiko used to work at while Wada Masato will play Makino who is the manager of the beauty salon which Motoko frequents. Naitou Risa will play Shimazaki Sumie who is the female manager of a ryotei and became a hostess later and Takashima Masanobu will play Hashida Tsuneo who is the director of a tuition school. Maya Miki will play Iwamura Eiko, the first mamasan who Motoko worked under in Ginza and groomed her to become a hostess while Takahata Atsuko will play Nakaoka Ichiko, the chief nurse and lover of the director of Narabayashi Clinic. The director of Narabayashi Clinic i.e. Narabayashi Kenji will be played by Okuda Eiji while Ito Shiro will play Hasegawa Joji, an influential figure in the political and financial worlds.