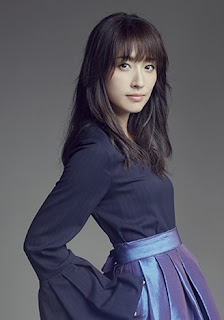 Tanaka Chie who is currently based in Taiwan, will be the guest star in Ep 9 of FujiTV Spring 2017 drama "Kizoku Tantei" which will be shown on 12 June. This is the first time in 12 years that Tanaka is appearing in a Japanese drama since 2005's FujiTV drama SP "Kenkaku Shoubai SP Kettou Takadababa". She will be playing jazz singer Mizuhashi Sawako who visits a camping site with her family but is later found murdered.

With regard to being offered the role this time, Tanaka commented that although the opportunity of staying in the 30th anniversary Getsuku drama was a big draw, being able to work with the director and producer who she collaborated with in her debut work "Bishoujo H" was another key reason for taking on this project. Although it has been a long time since she acted in Japanese, she was heartened by the warm welcome and support from her co-stars and staff. In fact, her friends were very excited to hear that she will be acting alongside Aiba Masaki who is well-known and popular in Asia.

Tanaka made her debut in 1996 after she was scouted in senior high school and acted in her first drama "Bishoujo H" in 1998. Following her appearance in the Hong Kong movie "Initial D", she was encouraged by the movie's director Andrew Lau to learn Mandarin and break into the Asian film industry. As such, she started learning the language at Taiwan for 8 months in 2006. Just when she was about to return to Japan, she was offered the leading role in the hit movie "Cape No.7" so this led to her staying on in Taiwan and acting in various Taiwanese and Chinese dramas and movies. Tanaka was named one of the top 100 most respected Japanese in the world by Newsweek Japan in 2009 and was chosen by the Cabinet Office in 2012 as one of the famous Japanese persons who was active on the world stage to promote the country.

Sources: Sponichi / Oricon
Posted by Chiaki at 11:33 AM