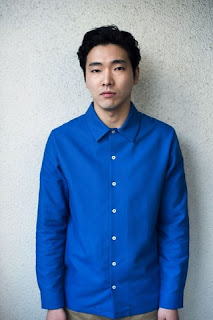 Emoto Tasuku, Shometani Shota and Ishibashi Shizuka will be starring in the new movie "Kimi no tori wa utaeru" (Your bird can sing) which will be directed by Miyake Sho. The movie is based on the same-titled novel published in 1982 by the late Sato Yasushi which was one of the nominees in the Akutagawa Award. Filming began in Hakodate City, Hokkaido, which was Sato's hometown, on 3 June and is expected to be wrapped up by the end of the month. The movie will be shown in autumn next year.

Emoto plays the lead character Boku who works at a bookstore in the suburbs and lives with Shizuo (Sometani) who is currently unemployed. The two of them fall in love at the same time with Sachiko (Ishibashi) during a summer filled with sadness and pain.

Emoto expressed his excitement about the filming's start and that the filming at Hakodate will progress steadily as they work hard on the movie. As for Sometani, he revealed that he is filled with deep emotion to work with Miyake who he knows well, using the stimulating novel of Sato and being able to act together with Emoto and Ishibashi. As such, he hopes to be able to immerse himself fully into the filming and enjoy the experience. Meanwhile, Ishibashi commented that she is very happy to play a charming woman like Sachiko and hopes to be able to savour each moment during the filming in Hakodate.