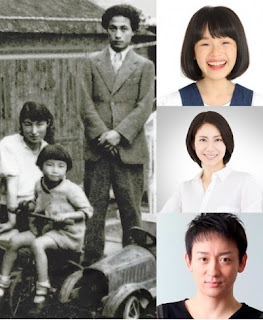 TV Asahi will be showing a new drama titled "Totto-chan" based on the life of Kuroyanagi Tetsuko which will begin its run from October in the Mondays to Fridays 12.30pm timeslot. This will be the afternoon timeslot's second offering that will be written by Oishi Shizuka and includes portions from the book "Madogiwa no Totto-chan". Although the actress playing Kuroyanagi has not been announced yet, Matsushita Nao will playing her mother Chou while her father Moritsuna will be played by Yamamoto Koji.

The story begins 4 years before Kuroyanagi was born in 1933 when Chou and Moritsuna meet for the first time and how they go through the tough days during the war and after it as a star is born into their family. Chou aspired to be an opera singer and was attending music school when she met the talented violinist Moritsuna. The childhood version of Kuroyanagi will be played by child actor Toyoshima Hana,

Kuroyanagi commented that she is very happy and excited about seeing the story of her family become a drama and looks forward to seeing the young days of her parents on screen. Having been an actress and TV celebrity for the past 64 years, she is thankful for what she has managed to achieve all this while and hopes that the drama will do well.

As for Matsushita, she expressed her wish to play her character well and show Chou's charms in the drama. Yamamoto revealed that they had heard some stories about Kuroyanagi's family from herself and pledged to play his role with the utmost sincerity so as to deliver a great story which includes both fiction and non-fiction elements.

Co-stars also include Takada Junji who plays Chou's uncle Inoue Hiroshi, Yagi Akiko who plays Chou's aunt and Hiroshi's wife, Sato B-saku who plays Chou's father and Komura Hiro who plays Chou's mother. Ozawa Yukiyoshi plays Shiina-san who is a cafe owner and rents an apartment to Chou and Moritsuna when they first got married while Takaoka Saki plays Ito Hanako whose husband was the first international architect in Japan and lives as a painter now. Takenaka Naoto plays Kobayashi Sousaku who was the principal of Tomoe Gakuen and had a great influence on Kuroyanagi's life. Ouki Kaname and Kurosaka Mami will also be part of the cast.