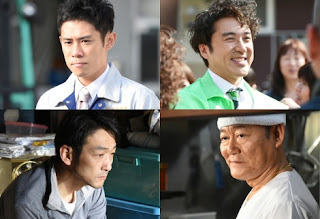 The supporting cast line-up of TBS Summer 2017 drama "Hello Harinezumi" starring Eita has been announced.  The drama is based on the same-titled manga by Hirokane Kenshi, was serialised in "Shuukan Young Magazine between 1980 and 1989. Although the manga was set in the Showa era, it will be adapted to be set in the modern Heisei era.

Eita plays the role of private detective Nanase Goro who works in the investigation agency Akatsuka Tantei Jimusho in Shimoakatsuka in Itabashi Ward of Tokyo where he takes on any case no matter how troublesome or difficult it may be. Goro is a bit of a lecher and a busybody but he is also passionate and sincere. Fukada Kyoko will be playing the mysterious heroine Shidawara Ranko while Morita Go will play Goro's partner Kogure Kyuusaku. Yamaguchi Tomoko will be playing Kaze Kahoru who is the boss of the agency.

Ito Atsushi plays Kawada, the president of Kawada Transport who passes the unreasonable requests from clients to Goro and his partners while Fukikoshi Mitsuru plays Nakai, the former secretarial section chief of "Thunder Trading" and has links to the mysterious Ranko. Muro Tsuyoshi will play Isagawa Ryoji who is standing for election in the Gunma Prefectural Council and a leader of civil movements and Kunimura Jun will play Kurita Seiji, a quiet chef working at a Chinese restaurant near Goro's agency and would feed them with unexpected requests from clients.