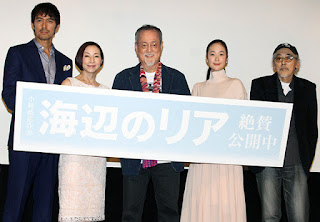 The first-day-screening event of new movie "Umibe no Lear" was held at Theatre Shinjuku on 3 June which was attended by the director Kobayashi Masahiro and cast members Nakadai Tatsuya, Abe Hiroshi, Kuroki Haru and Harada Mieko. The movie features Nakadai as Kuwahata Chokichi who used to be a famous actor but is suspected to be suffering from dementia now. He is betrayed by his elder daughter Yukiko (Harada), her husband-cum-his-former-disciple Ikuo (Abe) and Yukiko's lover, a mysterious driver (Kobayashi) and gets sent to a high-class old folks' home. One day, Choukichi runs away from the home and wanders to the beach where he meets his younger daughter Nobuko (Kuroki) who he had with his lover. Although he had thrown Nobuko out in the past, he begins to imagine seeing her as the image of Cordelia who is the beloved daughter of King Lear after talking to her. Once his past memories come back to him gradually, Choukichi also heads towards the world of insanity.

After the screening, the audience gave a standing ovation and shouted "bravo" to the cast as they entered the theatre. Nakadai thanked them for their thunderous applause which made him feel proud that they have made a good movie and he hopes that there will be as many people possible who feel the same way. Although he feels that being an elderly may be seen as being a nuisance by others, he found that it wasn't such a bad thing to be old after working on this movie.

Abe revealed that in the script, the last scene spanned more than 10 pages and contained the lines from King Lear so he thought that it would be impossible for Nakadai to remember so many lines when he first read it. However, Abe was very impressed and touched by how Nakadai did not make any mistakes in his lines so it was like seeing hope for himself in future when he gets older as an actor. Kuroki who acted with Nakadai in most of her scenes, also expressed her respect and gratitude to be able to gain this experience and spend that much time with him.

In conjunction with the release of the movie, Nakadai started his own Twitter account at the age of 84. He commented that although he is an old man who lives alone, he finds himself suddenly with many new friends through this medium. As for working with the director again, Nakadai suggested that he should do a baddie role next time.