Kobayashi Mao passes away due to breast cancer 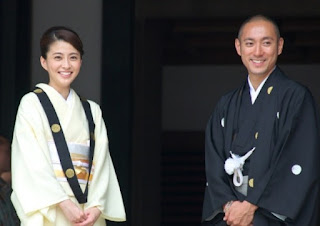 Kobayashi Mao passed away on 22 June at the age of 34 due to breast cancer. She leaves behind her husband Ichikawa Ebizo and two children i.e. Reika who is 5 years old and Kangen who is 4 years old.

Kobayashi was first diagnosed with the illness back in October 2014 during a medical check-up and had been battling it quietly before her husband Ichikawa Ebizo had to reveal his wife's condition in June last year amid media speculations. At that time, she was already in such a serious condition that surgery was not an option. 3 months after the revelation, Kobayashi started her own blog to share her thoughts and experience while undergoing treatment. During this period, Kobyashi had been going in and out of the hospital as her condition was rather unstable. On 22 April this year, she went through surgery where it was found that the cancer had spread to her jaw. After being discharged from the hospital on 29 May, she had been undergoing treatment at home and mentioned in her blog entry on 4 June that she had a fever of 39 degrees Celsius. Unfortunately, despite her valiant efforts in trying to overcome the illness, her condition still did not improve in the end.

Kobayashi entered showbiz in 2002 when she was still a student at Sophia University after appearing in the NTV programme "Koi no karasawagi" with her elder sister Kobayashi Maya who is a freelance announcer now. She became the weather forecaster in FujiTV's "Mezamashi Doyoubi" from 2003 and appeared in a number of dramas such as 2005 FujiTV drama "Slow Dance", 2006 FujiTV drama "Unfair", 2006 TBS drama "Oishii Propose" and "Taiyou no Uta". She then became the newscaster on NTV's "NEWS ZERO" from 2006 and met her husband Ichikawa during an interview in December 2008. The couple started dating in June 2009 before getting married in March the following year. Their daughter was born in 2011 while their son was born in 2013.

In the morning of 23 June, Ichikawa updated his blog where he said that today is the day when he cried the most in his life and asked for the media gathered outside his house to leave as it was causing a disturbance to his neighbours. He also revealed that he would be holding a press conference later in the afternoon.

After completing his daytime performance "Ichikawa Ebizo Dai Yonkai Jishu Kouen ABKAI 2017 ~ Ishikawa Goemon Gaiden ~" at Theatre Cocoon Bunkamura, Ichikawa held a press conference at 2.37pm to break the news that his wife had passed away at home the previous night. He revealed that while at work yesterday, he got a LINE message from his mother-in-law about Kobayashi's worsening condition and rushed home to see her. Although she had been unable to speak yesterday, she managed to say "I love you" to her husband before she breathed her last. Ichikawa also explained why he decided to hold the press conference because there were so many media personnel gathered outside his place so he had to make a proper announcement earlier than when he and his family had planned to do so.

When asked how his children are coping, Ichikawa revealed that Reika had been sticking to her mother and slept by her side yesterday so he thought that she understood what was happening. As for Kangen, he appeared to understand but not entirely and kept touching his mother's face and feet. Although he doesn't think that he will be able to make up fully for the loss of their mother, he pledged to do his best for his children.