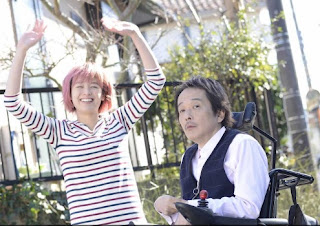 Lily Franky will be starring in the new movie "Perfect Revolution" which will be shown in cinemas from 29 September. The movie which is based on the true story of Kumashino Yoshihiko who suffers from cerebral palsy and is an activist on the understanding of sexual issues involving the handicapped.

Lily plays the lead character Kuma who is an activist campaigning for those like him as the handicapped also have sexual needs and the desire to be in love. He meets Mitsu (Seino Nana), a pink-haired prostitute who has a sociopathic personality disorder and the two of them fall in love with each other unexpectedly. Co-stars include Koike Eiko, Okayama Amane and Yo Kimiko.

Lily commented that when he heard that his friend Kumashino's story was going to be made into a movie, he wanted to take part in it no matter what role he was given. He also stressed that this is a movie of love where all the characters have a handicap in one way or another. Meanwhile, Seino who had to do an intimate scene with Lily to show the complete revolution of Kuma and Mitsu against all odds, said that although her character is very difficult to play, she got advice from the director and Kumashino and gave her all during her performance. She also commented that she formed a good combination with Lily and it was the first time when she could convey her feelings that freely and directly during acting.