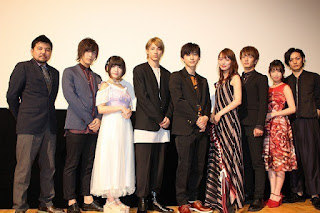 The first-day-screening event of new movie "Tomodachi Game Gekijouban" was held at Cine Libre Ikebukuro on 3 June which was attended by the director Nagae Jirou and cast members Yoshizawa Ryo, Uchida Rio, Yamada Yuki, Ohkura Shimon, Kubota Yuki and Ueno Yuuka. The story describes how Katakiri (Yoshizawa), a senior high school student who had been taught by his mother to value friendship over money, gets involved in a mysterious game "Tomodachi Game" with four of his classmates i.e. Mikasa Tenji who is the No.1 at school in terms of academic performance, Sawaragi Shiho (Uchida) who is the daughter of a police detective and vice chairman of the class committee, Shibe Makoto who is the moodmaker of the group and a politician's son and Kokorogi Yutori who is an anime lover. However, the game inevitably creates situations where Katakiri has to doubt his friends despite the fact that he has to trust them in order to win it.

With regard to the movie finally being ready to be seen, Yoshizawa commented that he was excited about the response from the audience and hopes that everyone will enjoy the film. When asked about what was tough during the filming, Yoshizawa said that it was very cold during the winter which was echoed by his co-stars and the director. Other than the times when they were having meals, they had to be on the rooftop for the filming which was a severe test of their physical strength. As for what was most enjoyable, they cited the Christmas party where the staff prepared various treats like stew and fried chicken for them.

As for the release date of the concluding movie "Tomodachi Game Gekijouban FINAL", it was announced to be 2 September.

Sources: Eiga.com / Oricon
Posted by Chiaki at 1:12 AM