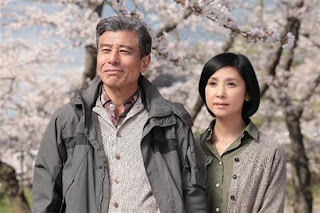 Tachi Hiroshi and Kuroki Hitomi will be starring in the new movie "Owatta Hito" (The Finished Person) which is based on the same-titled novel by scriptwriter Uchidata Makiko and will be directed by Nakata Hideo. The actors last worked together 20 years ago in the 1996 TV Tokyo drama SP "Mueitou".

The comedic movie features Tachi as the lead character Tashiro Sousuke who worked in a major bank and looked like he was on the path to success when he got transferred to a subsidiary and is about to retire without any achievement to his name. However, having been so focused on work over the past few decades, Sousuke desires to continue working or else he won't be able to continue living without a purpose. Without any special skills, he can't find anything in particular to do. Upon seeing this, his wife Chigusa (Kuroki) who works as a hairdresser and his daughter jokingly suggest that Sousuke should find someone to date. Coincidentally, Sousuke indeed finds someone who he is interested but things do not turn out the way he wants and his life starts to take on an uncontrollable twist...

Tachi jokingly commented that he had been acting as a police detective for the last 30 years and his new "workplace" in this movie has nothing to do with guns and riding a Harley Davidson bike. Although the title is rather harsh to describe someone who had retired, he hopes that he will be able to show the comical side of his character's retirement life through his acting in this movie and can't wait for the filming to start. As for Kuroki, she described her character as someone who has no more patience for her husband who lost his past glory acquired from his career but still tries to care for his feelings. She expressed her joy at being able to work with Tachi who gives her a sense of familiarity and security since they had worked together since their 20s so she believes that she will be able to rely on him during the filming.

Part of the filming was done in Iwate Prefecture during April to capture the sakura scenery but the actual filming will begin from 1 July to early August.