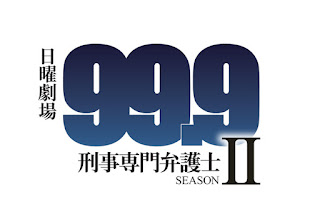 TBS Spring 2016 drama "99.9 Keiji Senmon Bengoshi" will be making a comeback in winter next year as the second season will be shown from January 2018 in the Sundays 9pm timeslot. The original drama featured Matsumoto Jun as the lead character Miyama Hiroto, a lawyer who worked with his colleagues Sada Hatsuhiro (Kagawa Teruyuki) and Tachibana Ayano (Eikura Nana) to take on cases involving defendants who were deemed to be as good as convicted and that there was a very slim chance of turning the tables.

Matsumoto and Kagawa will return in Season II to reprise their roles while Eikura who is currently pregnant, will not be appearing in the sequel. In her place is the new heroine Ozaki Maiko played by Kimura Fumino who used to be a judge but quit due to a case. Maiko had passed the bar exam while she was still an undergraduate student at University of Tokyo and became a judge at a very young age but after she resigned, she tried to stay away from the legal world. One day, she accompanies her friend to Madarame Law Firm for a case which marks the beginning of her clashes with Miyama. On the other hand, Sada who knows how good Maiko is, invites her to join their law firm even though she is clearly reluctant at first to have anything to do with the legal circle again. She then decides to return to becoming a lawyer and joins Madarame Law Firm where she faces off with her ex-boss who has something to do with why she had to quit. The reason why Miyama wanted to become a criminal lawyer and the truth behind a case which happened 26 years ago will also come to light in the sequel.

Matsumoto commented that he is very excited about being able to work with the same team again on the sequel and thinks that they will have fun during the filming. Although this is the first time he is working with Kimura, he hopes that she will also enjoy working with them and called upon viewers to support them when it's time for the drama's broadcast.