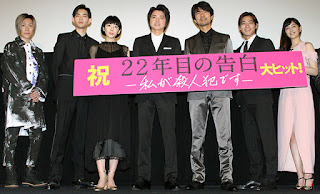 The movie which is based on the 2012 South Korean film, begins in the year 1995 where there were 5 peculiar murder cases. The murderer would always get someone close to the victim to witness how he would strangle the victim from behind with a rope but he would let the witnesses go and speak to the media on how the murders happened. Ito plays the role of Makimura, the police detective who was in charge of investigating the serial murders but failed to catch the cunning murderer and his respected superior ended up being killed as well. 22 years later in 2017 when the case is nearing its statute of limitations, a man named Sonezaki (Fujiwara) claims to be the culprit for the 1995 murders and even publishes a book titled "Watashi ga satsujinhan desu" to talk about the cases. Despite the disgust towards Sonezaki's actions, the intensive attention showered on him via the media and SNS makes him become the talk of town.

Ito Hideaki who was absent from the event due to other work arrangements, recorded a video message to apologise for his absence and said that Fujiwara would be around to make the event an success. As the video message was very short, Fujiwara complained that the content was too simple while Nomura poked fun at Ito for doing it like an apology press conference where he said nothing but sorry. Nakamura then joined in to say that it was a great "sin" for Ito to skip the promotional event especially since he is the joint lead with Fujiwara.

As the cast were reminded not to say too much during the event in order to avoid giving away the story, Fujiwara chose his words carefully while trying to promote the movie. He apologised to Nakamura for having to strangle him by his neck during the filming which lasted from morning to night but was stopped from revealing more by the alarm sound. Nakamura continued the story by saying that Fujiwara kept saying sorry to him but he actually thought of asking Fujiwara to go easy on him because Fujiwara was so immersed in his acting that he applied a lot of strength during the strangling. In the end, Nakamura did not raise his request and allowed Fujiwara to continue what he was doing.