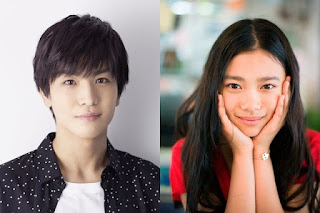 EXILE and Sandaime J Soul Brothers member Iwata Takanori and Sugisaki Hana will be joint leads in the new movie "Perfect World" directed by Shibayama Kenji. The film which is based on the same-titled manga by Aruga Rie and had won the best shoujo manga title in 2016 as voted in French longtime manga magazine "Animeland", features Iwata as Ayukawa Itsuki, an architect who is wheelchair-bound due to an accident and Sugisaki as Kawana Tsugumi, an OL whose first love Itsuki was her senior in senior high school. Thanks to an unexpected reunion, their paths cross again but their relationship is faced with difficulties due to his condition.

Iwata commented that this is the first time that he is playing a manga character and with a physical handicap. As the theme of living with one's most important person and coping with the challenges of a handicap are serious topics, he will put in his best effort to make the story as easy to identify with as possible. As for Sugisaki, she hopes to show the charm of the story directly to the viewers and try her best to portray her character.

Filming began on 2 June and is expected to wrap up by mid July. The movie will be shown in cinemas in 2018.