"Hirugao" side story to be published in latest issue of "an.an" 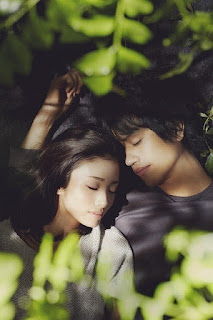 In conjunction with the impending launch of the movie, the side story of "Hirugao" will be published in the 7 June issue of "an.an" which describes what happened during the three years since the drama ended to the time when the movie starts. In the drama version, Sasamoto Sawa (Ueto Aya) and Kitano Yuichi (Saito Takumi) were forced to break up by his wife Noriko (Ito Ayumi) which led to them not seeing each other for three years. At the beginning of the movie, Sawa and Yuichi bump into each other again at the town where she has lived in since her divorce. Takigawa Rikako (Kichise Michiko) will also appear in the side story which was written by Inoue Yumiko who wrote the scripts for both the drama and movie versions.

The movie version of "Hirugao" will be shown in cinemas from 10 June.

They really are milking this, aren't they? I saw the drama and while it was decent, I never really thought it needed a movie and now a side story as well.

Hi junny, I actually feel that the drama's ending was good as it was. It would have been too fairytale-like to let the two of them end up together because they were involved in an affair after all i.e. morally wrong. Despite the fact that their respective spouses had issues, it still doesn't resolve them of the wrong they did.

Honestly speaking, the way they parted should have left a deeper impact on the viewers because it was heartwrenching and sad. Perhaps that's why people wanted to see what happens to them after that ending. As long as Kitano's wife continues to stand in the way, I seriously doubt that they can get together.

Hi Chiaki, exactly my sentiments. The drama's ending tied up most points while leaving a few things open, so it was fairly realistic and not too depressing. Some storylines just don't need to be milked because it'd ruin the whole feel of things. The movie and side story now almost feel like a hard-sell of Sawa and Kitano being soulmates and stuff.