Tanaka Tetsushi reported to have an affair during Nakama Yukie's absence 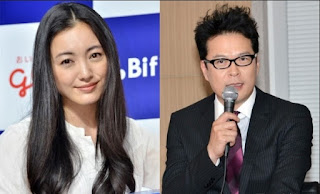 According to the 2nd June issue of "FRIDAY", Tanaka Tetsushi was reported to have an affair during his wife Nakama Yukie's absence. In the report, Tanaka was photographed with a hat covering most of his face and a mask and wearing an Adidas jersey, training pants and sandals as he headed to a main road to take a taxi on a night during the recent Golden Week holidays. However, after reaching his destination in 10 minutes, he did not alight for a while and inspected the surroundings for a while before walking towards an apartment block. On another day, Tanaka was caught coming out from the same apartment block with a female stylist. It was later determined that the stylist in question worked with Tanaka and they met up during Nakama's absence as she was overseas for work. With regard to queries from the media about this matter, Tanaka's agency declined comment.

Tanaka and Nakama got married in September 2014 and it was rumoured that she had been cutting back on work activities to prepare for pregnancy. Meanwhile, Tanaka can be seen in two ongoing dramas this season i.e. "CRISIS" and "Kinkyuu Torishirabeshitsu 2".

How dare he.. Poor Nakama-san :(
Hope it'll be alright

I never really undersroo what she saw in him, Nakama-san has very low standards.