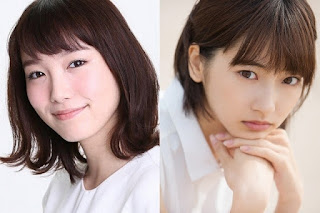 Iitoyo Marie and Takeda Rena will be joint leads in the upcoming MBS / TBS Summer 2017 drama "Maji de koukai shimasu" (I am serious about sailing) which marks their first leading role in a drama series. The drama is an original story featuring first-year university students Sakamoto Marin (Iitoyo) and Ishikawa Tsubame (Takeda) who aspire to become ship navigation officers and undergo an one-month training. Besides having to cope with the tough training and sea-sickness, the girls are also caught in a reverse harlem situation where 80 percent of the students in the course are men. Marin is oblivious to her surroundings but has a strong passion for boats and refuses to give up while Tsubame repeated a year to get into the maritime systems engineering course which she still regrets to this day. However, as a result of her interaction with Marin, she slowly undergoes a change in her mentality.

Iitoyo commented that although she is happy about taking on the leading role this time, she is also filled with a great sense of responsibility. As such, she will try to learn more about the world of maritime navigation in order to play her character well and work hard with and learn from Takeda to produce a good drama. As for Takeda, she also echoed Iitoyo's views and hopes that viewers will come to know the charms behind this industry through the drama.

The drama will begin its run on MBS and TBS respectively from 2 July and 4 July at 12.50am on Sundays and 1.28am on Tuesdays.