Kubozuka Yosuke announces the arrival of his second child 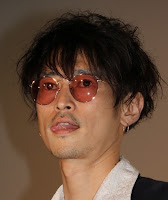 Kubozuka Yosuke announced the arrival of his second child in an English message posted on his Instagram account on 27 June. He revealed that his wife PINKY who is a reggae dancer, gave birth to their daughter on 20 June which was about 10 days before the expected due date and expressed his thanks to her, her doctor, the midwife, their family, crew and God for their support. According to the message, it was a difficult labour for PINKY as the entire process laster 33 hours. Kubozuka was full of praise for his daughter who he described as being so cute to the extent of him very surprised. PINKY also updated her blog where she revealed that Kubozuka had already chosen the name Amato for their daughter (Kanji characters not announced though) and she thanked everyone for their love and well wishes.

Kubozuka was previously married to his ex-wife from May 2003 to July 2012 and their son was born in October 2003. He married PINKY last December and announced her pregnancy in March this year.