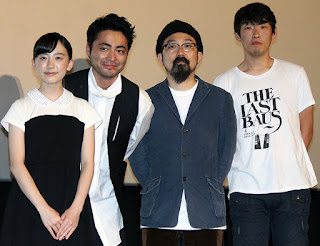 The first-day-screening event of new movie "Eiga Yamada Takayuki 3D" was held at TOHO Cinemas Shinjuku on 17 June which was attended by the directors Yamashita Nobuhiro and Matsue Tetsuaki as well as cast members Yamada Takayuki and Ashida Mana. The movie was made with the intention of winning an award at the Cannes Film Festival and is an unconventional work featuring 33 years of Yamada's life. The production process of the movie was made into a documentary drama "Yamada Takayuki no Cannes Eigasai" directed by Matsue  which was shown via TV Tokyo between January and March this year. Ashida who is the lead in the movie, was also the host for the screening event.

Ashida commented with a smile that it was great that the movie could be released successfully and that people who want to know more about Yamada will like this movie. In addition, she also praised Yamada for being cool to want to know more about himself. However, Yamada whose monologue forms the bulk of the movie, said that he wanted to stop the release of the film but couldn't do it. He also revealed that he regretted saying too much in this movie even though he meant to be experimental in the first place. Yamashita chipped in to say that although the movie is simple, there is so much information so he called upon viewers not to think so much or they will get a headache. Despite so, Yamada said that he was too absorbed with making a movie to win a Cannes award that he didn't spend too much time thinking about the story or acting. However, his desire to win an award for his movie is still very much alive and he hopes to win a Nippon Academy Award as he has not been even invited to the awards once in his 18-year acting career. Before he can do that, he revealed that he will have to increase his savings so as to have the funds to make another movie.