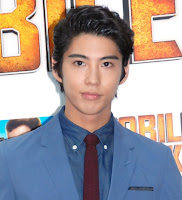 Kaku Kento will be taking over Koide Keisuke's role in the upcoming NTV Summer 2017 drama "Aishitetatte, Himitsu wa aru" starring Fukushi Souta which will be shown from 16 July in the Sundays 10.30pm timeslot. Koide was exposed for having alcohol and sex with a 17-year-old girl which led to his indefinite suspension of his acting career and being taken off the cast of this drama.

Fukushi plays the lead character Okumori Rei who killed his father (Horibe Keisuke) in the summer of when he was in the third year of junior high school so as to protect his mother Akiko (Suzuki Honami) who suffered from domestic violence inflicted by her husband. In order to hide his crime, Rei and Akiko decided to bury the corpse in the back garden of their house, report him as missing and share this dark secret between themselves. Rei strives hard to become a lawyer without making friends or falling in love. 11 years later, the 26-year-old Rei meets Tachibana Sawa (Kawaguchi Haruna) in graduate law school and the two of them fall in love with each other. Although Rei has made up his mind to get married to Sawa with his mother's blessings, someone who seemingly knows about his secret sends an alarming message to him. Co-stars include Endo Kenichi who plays Sawa's father and is the chief prosecutor, Koide Keisuke who plays Sawa's elder brother at odds with his father, Okae Kumiko who plays Sawa's mother and tries to keep her family together, Suzuki Kosuke who plays a doctor in love with Akiko, Shirasu Jin who is a mutual friend of Rei and Sawa, Yamamoto Mirai who plays a teacher of Rei and Sawa, Emoto Tokio who is a paralegal assisting Sawa during her internship and Yashiba Toshihiro who plays a police detective investigating the disappearance of Rei's father 11 years ago.

Kaku will be taking on the role of Sawa's elder brother who is a journalist. However, as he is also involved in the TBS Summer 2017 drama "Wanitokagegisu" which begins its run from 19 July, adjustments need to be made to his schedule before he can join the filming for this drama. In addition, Kaku will also be appearing in the WOWOW drama "Akira to Akira" which starts from 9 July (filming had been completed) and the musical "Young Frankenstein" which will begin its run from 11 August.