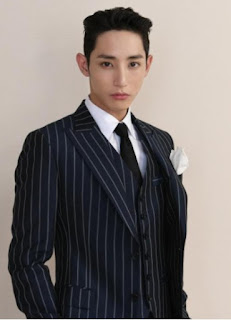 Korean actor Lee Soo Hyuk will be appearing in the upcoming TBS Summer 2017 drama "Gomen, Aishiteru" starring Nagase Tomoya which begins its run from July in the Sundays 9pm timeslot. This will be Lee's first appearance in a Japanese drama.

The drama which is a remake of the same-titled 2004 South Korean drama from KBS starring So Ji-sub, features Nagase as the lead character Okazaki Ritsu who was abandoned by his mother Reiko (Ootake Shinobu) when he was a child. One day, when Ritsu gets embroiled into an incident that causes him to suffer a life-threatening injury, he decides to meet Reiko for the last time and do something for her out of filial piety because he doesn't know when his life will end. However, when he sees how much she loves her son Satoru (Sakaguchi Kentaro) who is a idol pianist and the happy and rich life she has compared to him who is wallowing in the low rungs of society, Ritsu vows to take revenge on her. At the same time, he falls for a woman Mita Rinka (Yoshioka Riho) who helps him by chance but he is sad to find out that she is in love with his half-brother who is Rinka's childhood friend.

Lee will be playing the role of Baek Ran who is the heir of a Korean mafia chief and admires Ritsu like an elder brother. Baek Ran was abandoned by his birth parents at an orphanage soon after he was born and became the adopted son of a couple who later went to South Korean. Later, Baek Ran left home to join the underworld and met Ritsu who works as a bouncer at the casino owned by his father. Baek Ran's presence becomes a trigger as to why Ritsu returns to Japan to look for his mother.

Lee commented that although he is appearing in a Japanese drama for the first time, he is lucky that he can speak Korean while acting so this allows him to focus on his acting. In addition, he is honoured to be able to participate in this remake of a very famous Korean drama and will try his best to do well. With regard to his character Baek Ran, Lee said that this is a manly character which he had not attempted before in Korea so he's grateful and very happy for this opportunity. He hopes to be able to show the bond and bromance between Baek Ran and Ritsu in this drama.