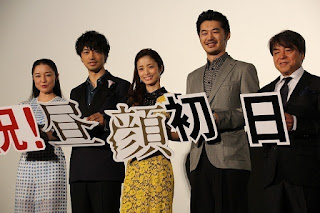 The first-day-screening event of new movie "Hirugao" was held at TOHO Cinemas Roppongi Hills on 10 June which was attended by the director Nishitani Hiroki and cast members Ueto Aya, Saito Takumi, Ito Ayumi and Hirayama Hiroyuki. The movie continues three years after the end of the drama version where housewife Sasamoto Sawa (Ueto) and high school teacher Kitano Yuichiro (Saito) were forced to end their affair by his wife Noriko (Ito). After her divorce, Sawa lives alone at a seaside town and unexpectedly meets Yuichiro again when he visits the town for work. This reignites their feelings for each other and they resume their affair before Noriko gets wind of it again.

Ueto commented that with the movie's release, this also marks the end of their promotional campaign so she had been feeling quite sad about this since the morning of the event. Saito echoed her view that he felt sad about letting go of this movie as well since they had been involved with this project for a pretty long period of time.

When asked about what "Hirugao" means to them, Ito said that it was the first time that she experienced this unusual take on extramarital affairs as depicted in the story. Ueto then followed up by praising Ito for being such a wonderful actress to the extent of controlling how blood flows in her body. During acting, it is difficult to let the emotions take control to the extent of making a person burn red with rage and having her veins pop up but Ito was able to do that with ease. Meanwhile, Saito said that being involved in "Hirugao" was a life-changing experience and he thanked everyone especially Ueto for working together to produce such a wonderful production despite the heavy theme. Upon hearing this, Ueto started crying and said that it was pressurising for them to be taking on such a controversial theme but the love and feelings experienced by Sawa made Ueto think about the theme seriously every day so she was especially sad to say goodbye to this character.

Hm, so nothing on Rikako and her art guy? The whole thing is about Sawa and Yuichiro? Ehhhh.

I did read an article where Ito Ayumi talked about her role and the debate on infidelity the drama spawned. Thought it was quite interesting: http://www.japantimes.co.jp/culture/2017/06/06/films/high-infidelity-ayumi-ito-reprises-role-hirugao/