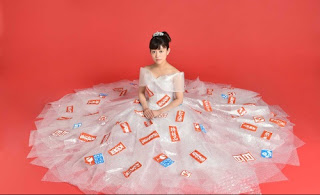 Takahata Mitsuki will be starring in the upcoming NTV Summer 2017 drama "Kahogo no Kahoko" (The overly-protected Kahoko) which will begin its run from July in the Wednesdays 10pm timeslot. The drama which is written by Yukawa Kazuhiko, features Takahata as the 21-year-old university student Nemoto Kahoko who is overly protected by the people around her that she has never spent the night outside her house, driven a car, done any housework nor even left alone at home before. She doesn't even have a wallet since everything will be paid for by her father. Every day, she is woken up by her mother Izumi (Kuroki Hitomi) and wears the clothes the latter chooses. Even though her father Masataka (Tokito Saburo) is concerned about Kahoko's future, he can't bring himself to discipline his daughter and allows his wife to intervene too much into Kahoko's life. When Kahoko meets a young man who comes from an entirely different background from hers, she gradually undergoes changes in her personality and life.

Takahata who is taking on her first leading role in a private network drama this time, expressed her excitement about the filming and hopes to be able to cope with the pressure and enjoy the process. As for playing someone who is very unlike her, Takahata commented that there should be a lot of new things she will discover in the process of playing Kahoko who behaves like an angel but actually needs the help of the people around her in order to survive. As for working with Kuroki and Tokito, Takahata said that she is on close terms with Kuroki since they had worked together before while it will be the first time collaborating with Tokito.

Filming is set to begin this weekend.