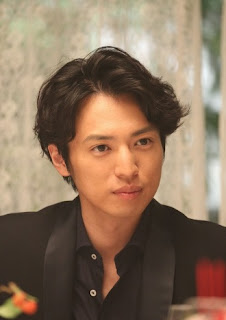 Kiriyama Ren will be appearing in the last two episodes of FujiTV Spring 2017 drama "Kizoku Tantei" to be shown on 19th and 26th June. This marks his first appearance in a Getsuku drama in 11 years since he made his debut in Autumn 2016's "Nodame Cantabile". He will be playing the role of Gudou Hiroki who is the heir of the Gudou family which deals in military equipment and based in Singapore. As Takatoku Aika (Takei Emi) receives a package containing JPY 500,000 and a note asking her to go to the Gudou family's bungalow Hoshimiso on 17 June, she meets Hiroki there and decides to ask about the mysterious person Masamune Koremasa who she believes is related to Kizoku Tantei (Aiba Masaki). However, Hiroki only reveals that he has heard not-so-good things about this name and advises her not to bring up the name for her own sake.

Kiriyama revealed that when he first got the offer to appear in "Kizoku Tantei", he actually thought that this would be his first appearance in a Getsuku drama. Back then when he appeared in "Nodame Cantabile", he only had one line but fumbled through it and ended up being scolded so he didn't quite remember what happened there because he was too nervous. As it had been more than 10 years since then, he is filled with deep emotion about being able to appear in another Getsuku drama again. When asked to comment on his character, Kiriyama described Hiroki as someone who isn't a kind soul and uses his wealth and status to have his way so it's quite exciting and enjoyable to play a person like this.

I don't remember him either. Since he had one line only, I guess that's perfectly understandable especially if he himself seemed to have erased it from his memory as well. ^__^

How about honoka yahagi? she's make appearance in this dorama too

How about honoka yahagi? she's make appearance in this dorama too