Nogiwa Yoko passes away at the age of 81 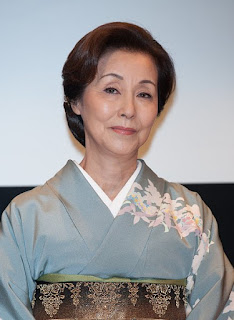 Actress Nogiwa Yoko passed away at the age of 81 on 13 June as reported on 15 June. According to insiders, her wake and funeral which was attended by family members only had been completed.

Nogiwa was born in Toyama City, Toyama Prefecture, before she moved to Suginami, Tokyo, at the age of 3. After graduating from Rikkyo University, she managed to overcome the low odds of 0.3% to become a NHK announcer in 1958 and was the host for programmes like "Ohayou Minna-san". After quitting from NHK in 1962, she worked at an advertising agency for three months and switched to become a freelance announcer which then landed her the job of being the host of TBS programme "Josei Senka". In the following year, Nogiwa made her debut as an actress in the TBS drama "Hi no Utsuwa" and continued working as an actress until she went to study French literature at Université de Paris in 1966. After she returned in 1968, she starred in the TBS drama "Key Hunter" which ran for 5 years and achieved ratings above 30 percent at the peak of its popularity. It was then when she met co-star Chiba Sonny and the couple got married in 1973 before she gave birth to their daughter Manase Juri in 1975 at the age of 37. However, when Chiba wanted to move to the US in 1994, Nogiwa didn't want to follow him there and felt that there were no longer any feelings between them so the couple went their separate ways.

Since then, Nogiwa had appeared in many dramas and movies and was especially known for her role as the mother-in-law who spoilt her son Fuyuhiko (Sano Shiro) in the 1992 TBS drama "Zutto anata ga suki datta". She also holds the title of the No.1 female guest who had appeared the most times (21) on Kuroyanagi Tetsuko's signature show "Tetsuko no Heya as they had been close friends since the days when she was a NHK announcer. Nogiwa's last drama appearances are in the ongoing TV Asahi afternoon drama "Yasuragi no Sato" and TV Asahi Spring 2017 drama "Keishicho Sousa Ikka Kyugakari" while she can also be seen in the movie "Itsumata kimi to Herijunzailai" which was released in cinemas on 24 May.

Nogiwa was diagnosed with lung cancer in 2014 while she was acting in the FujiTV afternoon drama "Hanayome no Noren" and went through treatment. However, she suffered a relapse in the following year and went through an operation to remove the tumour. Although her condition had seen an improvement after chemotherapy, rumours of her being in ill health persisted especially when she was the only person in the cast absent from the production press conference of "Yasuragi no Sato" held on 16 March this year.

With regard to why Nogiwa passed away, her agency said that they would like to refrain from making her health problems public so as to respect her privacy. Even though Nogiwa had a number of illnesses in the past, she still tried her best to live healthily and happily.

This is very sad indeed. I have always enjoyed her work. I'm watching her in Hissatsu Shigotonin currently. She will be missed.

sad. when she died, i have the feeling she was waiting for her husband or someone to reach out to her, but never happen.

God watch over you

your performance for Lone Wolf and Cub, tv episode 10 season 1
is my favorite of all lone cub wolf