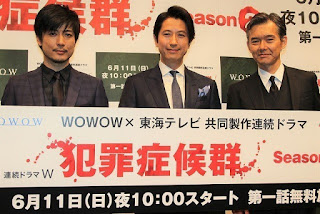 The completion screening event of WOWOW / Tokai TV Spring 2017 drama "Hanzai Shoukougun Season 2" was held at Jiji Tsushin Hall on 5 June which was attended by the cast members Tamayama Tetsuji, Tanihara Shosuke and Watabe Atsuro. The drama is based on the three-part "Shoukougun" novel series by writer Nukui Tokuro where "Shissou Shoukougun" (Disappearance Syndrome) and "Yuukai Shoukougun" (Kidnap Syndrome) will form Season 1 while "Satsujin Shoukougun" (Murder Syndrome) will be made into Season 2.

Tamayama plays the role of Muto Takashi who is a former police detective using illegal methods to solve cases which are difficult to handle by the police while Tanihara plays Muto's buddy and a police detective Kaburagi Wataru and Watabe plays Tamaki Keigo who takes charge of the special missions given to Muto. While exploring the lives of these men, the topic of whether revenge is right or wrong is discussed in this suspense drama.

In Season 1, it features the story of how Muto's younger sister was killed by an underaged person and didn't get his due punishment. Although he had the urge to take revenge for his sister, the murderer suddenly committed suicide. Muto realised that this frightening trait in his character which could bring him over the edge and decided to quit being a police detective. One year later, he starts to take on cases from the police assigned by Tamaki which they are not in a convenient position to handle. Season 2 describes how Kaburagi who used to date Muto's sister gets trapped by the consequence of his decision to take revenge and how he and Kaburagi clash over their views about revenge as well as how this leads to a tragic ending for them.

Although the lead is supposed to be passed over from Tamayama to Tanihara in Season 2, Tamayama recounted that the producer told him that he could afford to take it easier in Season 2. However, when he saw the script, he still had a fair number of scenes and there were many explanatory lines he had to say to explain the story and "complained" about the producer not delivering his part of the promise which led the audience to laugh at his grouse. Tanihara also chipped in to echo this view by explaining that he only had to appear in four episodes of Season 1 but in comparison, Tamayama had to appear all the time in both seasons thus leading the latter to complain again that he did not get a good deal after all.

During the Q & A session, the cast were asked about what kind of syndrome they had in their behaviour. Tanihara revealed that he would find the zip on his pants unzipped about 70 percent of the time because he would be in such a hurry to return to the filming set and only remembered his blunder after he was done with the scene. Sometimes, the actresses who worked with him would be the ones who reminded him which made him very embarrassed. However, he does not think he will be able to recover from this "sickness" though.

Tamayama also revealed that as he had many scenes together with Watabe in the drama, they would talk about various things during the filming breaks. Unlike Watabe who was always relaxed, Tamayama admitted that he was the type to get nervous easily. There was once when Watabe told Tamayama before the filming that he bought a car with his credit card which led the latter to keep thinking how it was possible to do that and he ended up making mistakes during the actual filming.