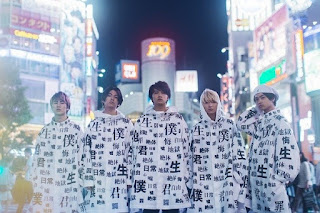 DISH// will be singing the theme song for the new FujiTV Summer 2017 drama "Bokutachi ga yarimashita" starring Kubota Masataka which begins its run from 18 July in the Tuesdays 9pm timeslot. The drama is based on the same-titled manga by Kaneshiro Muneyuki and Araki Hikaru serialised in "Young Magazine" which had recently ended its run in April this year. However, the drama will have a different ending from the manga. Kubota plays the lead character Tobio who is a second year student at Boke Senior High School and does things with minimal effort only. One day, he happens to see his friends being beaten to a pulp by students from the high school opposite Boke which is known for being a hotspot for delinquents. With the intention of playing a trick on those students, Tobio plots a small prank. However, on the day he and his friends are supposed to take action, a large scale explosion takes place which causes Tobio and his friends to become suspects for this crime. Faced with a situation which has gone out of hand, the group makes their escape as they struggle to come to terms with the reality facing them.

The theme song titled "Bokutachi ga yarimashita" was written by OKAMOTO'S Okamoto Shou so the members of OKAMOTO'S joined DISH// during the recording of the song. They will be performing the song live for the first time during a concert held at Osaka on 28 June featuring the two bands.

Source: The Television
Posted by Chiaki at 4:35 PM