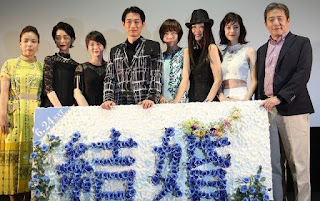 The completion screening event of new movie "Kekkon" was held at Kadokawa Cinema Shinjuku on 8 June which was attended by the director Nishitani Shinichi and cast members Dean Fujioka, Shuko, Nakamura Eriko, Matsumoto Wakana, Ando Tamae, Manda Hisako and Kanjiya Shihori. The movie is based on the 2012 novel by Naoki Award-winning author Inoue Areno and features Fujioka as a fraudster Koumi Kenji who dupes women into believing that he will marry them and cheats them of their money by taking on a variety of names and identities. During the process, he is assisted by his buddy Sengoku Ruriko (Shuuko) who was almost cheated by Koumi in the past. In order to find out the truth, Koumi's victims launch an investigation which leads them to Ruriko where they subsequently find out the real motive of Koumi. Kanjiya plays Hatsune who is Koumi's wife. The women who are besotted with Koumi include Nakamura who plays Kudo Asami, an employee at a furniture shop, Matsumoto who plays Yoshioka Mana, an aspiring editor, Ando who plays a city office employee Hobara Hatoko. Furutachi Kanji plays a detective Yajima who tries to investigate Koumi with Hatoko while Manda plays a mysterious woman Hiragi Yasue who helps Koumi.

Fujioka commented that although his character is a criminal after all, there is a reason why he became the way he is. As such, when he delved deeper into his character, he could see the parts in Koumi's character's which people may identify with and find it hard to ignore. When the host followed with a question to the audience if they would be willing to be deceived by Fujioka, they replied uniformly with a loud "yes" which made him smile in embarrassment.

Other than the audience which was going ga-ga ove Fujioka, his female co-stars were full of praise for him as well, Shuko cited a dance scene which she did with him and gushed about how gentlemanly and gentle he was so she was glad to let him take the lead. Nakamura chipped in to say that Fujioka is always very cool and consistent even though she had expected that he may let down his guard at times. Matsumoto commented that he's too perfect and treated them so gentlemanly that it's hard not to like him. When asked about the charm of Fujioka, Manda said that the expression of him as he looks towards somewhere far is especially appealing and seems to be a natural part of him rather than an acquired technique. As such, if Fujioka is a real marriage fraudster, his victims would probably be willing to continue being deceived by him.

The movie will be shown in cinemas from 24 June while the theme song "Permanent Vacation" written and sung by Fujioka will be released on 5 July.