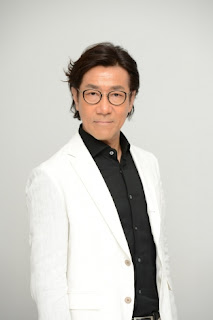 Kishitani Goro will be appearing in the NTV Summer 2017 drama "Nou ni sumaho ga umerareta" starring Ito Atsushi which begins its run from 6 July in the Thursdays 11.59pm timeslot. This will be the first time in 20 years since they last worked together in the 1996 FujiTV drama "Minikui Ahiru no ko" where they played a teacher and a student.

The science-fiction drama is based on the book "Shin Kikaku Konshin no kikaku to hassou no te no uchi subete misemasu" by Suzuki Osamu which talks about the secrets behind the planning of hit TV programmes. Ito plays the lead character Orimo Keita who is a 34-year-old salaryman placed on the retrenchment list by his employer which is an apparel company. He is divorced and raising his 9-year-old daughter on his own. Having the power to see the messages sent and received by other people in his brain, he makes use of this to solve various problems, help others and become a better person while being embroiled in these troublesome issues at the same time. Shinkawa Yua will play the heroine Ryuuko who teaches him how to use the smartphone in his brain. Kishitani plays the role of Kurobe Jin who is the president of the company where Keita and Ryuuko work at and built the company from scratch in just one generation.

Kishitani commented that when he last worked with Ito, he was still a primary school student so he is glad and proud to see him grow up to take on the leading role in a drama. He also revealed that ever since then, he would call Ito by his character name Kenta whenever they met up. Just when he thought that he could call him by another name this time, it ends up that his character Keita is so similar to Kenta so Kishitani declared that he would try to call Ito by his full name going forward.