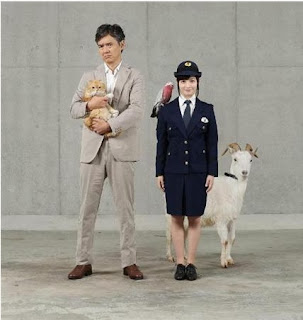 Watabe Atsuro and Hashimoto Kanna will be starring in the new FujiTV Summer 2017 drama "Keishicho Ikimonogakari" (Metropolitan Police Department Living Things Section) which begins its run from July in the Sundays 9pm timeslot. The drama is based on the "Keishicho Ikimonogakari" series of novels by Okura Takahiro and set in a fictitious plants and animals department within the general affairs section of the MPD where a lieutenant and a newbie police officer work together to solve cases while looking into the ecology of plants and animals.

Watabe plays Sudou Tomozou, a 48-year-old lieutenant who used to be from the first investigation section and was taken off the frontline  6 months ago due to an injury and sent to the Ikimonogakari which takes care of pets left behind by suspects and those whose whereabouts are unknown. Much as he desires to go back to the frontline, he knows that his condition and age are not in his favour. Sudou meets the 22-year-old newbie police constable Usuki Keiko (Hashimoto) who graduated from the veterinary faculty in university and is a huge animal lover who prefers them to human beings. Sudou gets angry at how Keiko seemingly behaves without a care for others but gradually appreciates her knowledge about these animals and observant powers which help him in solving the cases they encounter.

Co-stars include Miura Shohei who plays the 33-year-old Ishimatsu Kazuo who used to be the buddy of Sudou when they were in the 1st investigation section, Hasegawa Tomoharu who plays 42-year-old Nittou Hajime and looks down on Sudou for being transferred from the frontline, Ishikawa Ren who plays the 23-year-old Mikasa Yayoi, a receptionist at the Police Museum, Denden who plays 68-year-old retired police detective Nidegawa Shoukichi and offers advice to Keiko in her investigations. Kiyohara Sho plays 28-year-old Sakurai Kaoru who works under Ishimatsu while Sudou's former boss Kitou Tsutomu will be played by Terajima Susumu. Asano Atsuko will play 52-year-old Tamaru Hiroko who is the only admin staff in the Ikimonogakari.

Thank you for the article. I so much want to see this series. I hope it gets subbed.