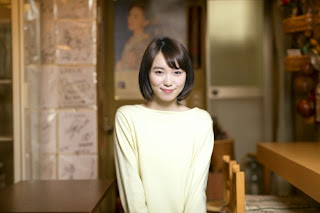 Iitoyo Marie will be taking on the heroine's role in the TV Tokyo Summer 2017 drama "Izakaya Fuji" starring Nagayama Kento and Oomori Nao. She will play the role of Kujirai Mai, an administrative staff working at a printing company who meets Nishio Eiichi (Nagayama) at the izakaya. The two of them then develop feelings for each other.

With regard to working with Nagayama for the first time, Iitoyo said that she thought that he seemed rather scary but upon meeting him, she realised that he is a very gentle person. As for meeting Oomori, Iitoyo revealed that there was once in the past when she went to a salon and asked for the same haircut as him so she was happy to be able to share this episode with him. Since this is the first time she is involved in a drama of this genre, Iitoyo commented that she has gained a lot through the experience so far.