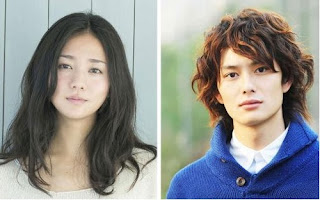 Okada Masaki and Kimura Fumino will be joint leads in the new movie "Itou-kun A to E" which marks their first collaboration and will be directed by Hiroki Ryuuichi. The film is based on the same-titled romance novel by Yuzuki Asako which was published in 2013.

Okada plays Itou Seijirou, a self-centred man who thinks very highly of his appearance and is insensitive to others' feelings. As a result, he always causes the women he meets to suffer due to his character flaws. On the other hand, Kimura plays Yazaki Rio who is a scriptwriter and keeps her true thoughts about other people hidden within. While trying to create a drama script about people's romance woes, she begins interviewing four women who she nicknames as A, B, C and D. Coincidentally, the four of them are all in love with Itou who is a student at the scenario writing school where Rio works as a lecturer. As Rio continues to observe what happens between the four women and Itou, she finds herself embroiled in this romance whirlpool and becomes the 5th women E.

Okada commented that after reading the novel, he had no good feelings towards Ito and couldn't identify with his behaviour at all. In short, Itou is a lousy guy but he is prepared to give his all to play this character. Although he has never met Kimura before, he is excited about being able to work with her. As for Kimura, she accepted the role because the director wanted to see her wickedness in the proud Rio who may actually be the best person to understand why Itou behaves the way he is. She is looking forward to creating an unforgettable film with Okada even though this is their first collaboration.

The movie will be shown in early spring 2018. Filming will begin in July.

Email ThisBlogThis!Share to TwitterShare to FacebookShare to Pinterest
Labels: Itou-kun A to E, Movie News