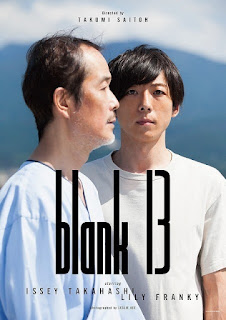 "blank13", the first full-length movie directed by actor Saito Takumi, will be screened at Cinema Shinjuku from 3 February 2018. The movie is based on the true story of broadcast writer Hashimoto Kouji about how a father who had gone missing for 13 years, was unable to mend ties with his estranged family. It was only until his death that his family members find out the truth about what happened during these 13 years from those who attend the father's funeral. Takahashi Issei plays the lead character Hashida Koji while Lily Franky plays Koji's missing father. Kanno Misuzu plays Koji's mother while Matsuoka Mayu plays Koji's girlfriend. Saito himself plays the eldest son of the Hashida family. The film was chosen as the Yubari Fantarando Taisho by the audience during the Yubari International Fantastic Film Festival 2017.

Saito commented that he is very happy that the release date of the movie has finally been confirmed although it is still some months away. As for Takahashi, he revealed that this is the first time that he had spent so much time prior to the filming to prepare for this movie which he felt very satisfied and happy about. When asked to comment about Saito as the director, he praised Saito for being passionate about his work and paid close attention to their acting rather than focus on the technicalities.