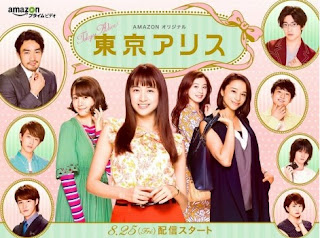 The supporting cast line-up of new Amazon Prime Video drama "Tokyo Alice" was announced. The drama which is based on the same-titled manga by Chiya Toriko, consists of 12 episodes and features Yamamoto Mizuki as the lead.

The story describes how 4 women who are around the age of 30 live in a sharehouse at Daikanyama, Tokyo, and how they try to pursue their own happiness in love and work. Yamamoto plays the lead character Arisugawa Fuu who spends most of her salary on fashion and has little luck in love. Although she has a cute appearance, she has an otaku personality. Co-stars include Triendl Rena who plays a budding manga artist Hada Mizuho, Takahashi Maryjun who plays a cool psychiatrist Sakuragawa Rio and Asahina Aya who plays a rich man's daughter Enjoji Sayuri and works at an art gallery in Ginza.

Otani Ryohei will be playing the role of Okuzono Shinji who is Fuu's love interest and her superior at work. Being cool and demanding, he is nicknamed "Iceman" by his co-workers and has nothing in common with Fuu. As for Sayuri's love interest Hiyama Akio, he will be played by Daito Shunsuke. Shiraishi Shunya will be playing Odagiri Shun who is Fuu's colleague and interested in her while Koseki Yuuta will be playing Rio's childhood friend Shinonome Ken who reunites with her after a long time. Sugino Yosuke will play Izumi Atsuto who works as a nurse at the same hospital as Rio and is in love with her and Yanagi Shuntaro will play Kashii Yuusuke who works as a cameraman and meets Fuu during the course of work. Last but not least, Satsukawa Aimi will be playing Sawamura Tamaki who is Okuzono's ex-girlfriend and works at the same company as him and Fuu.