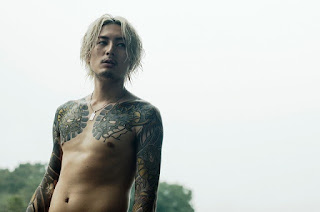 Mamiya Shotaro will be starring in the new movie "Zenin Shikei" (Everyone on death row) which is directed by Kobayashi Yuki and will be released in cinemas from 18 November. The movie is based on the book "Wagaikka Zenin Shikei" written by Suzuki Tomohiko about the mass killing of a family of 4 in Omuta City, Fukuoka Prefecture in September 2004 by another 4-member family living in the same neighbourhood for the sake of money. As a result, the culprits were all given the death sentence for their roles in this case.

Mamiya plays the role of the family's second son Takanori who was roped in to commit the robberies by his gangster father Tetsuji (Musaka Naomasa), hysterical mother Naomi (Irie Kanako) and elder brother Satoshi (Maiguma Katsuya) as the family was in financial trouble due to debts and the mandatory contributions to the gang. Takanori's girlfriend Kaori will be played by Shimizu Hazuki. However, things got out of hand and led to the multiple murders in order to achieve their aim. Other co-stars include Ochiai Motoki, Fujiwara Kisetsu and Torii Miyuki.