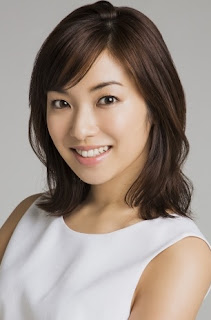 Uchiyama Rina will be starring in the new NHK drama "Machikouba no Onna" (The woman of the small town factory) which consists of 7 episodes and will begin its run from 10 November in the Fridays 10pm timeslot. The story is based on the book "Machikouba no Musume" by Suwa Takako and set in a small town factory in Aichi Prefecture so filming will be done on location in Nagoya.

Uchiyama plays the lead character Arimoto Hikari who is a 32-year-old housewife and lives with her husband (Nagai Masaru) and their son. When she was a child, her father Taizo (Tachi Hiroshi) tried to groom her to become his successor and manage the family business i.e. a small factory but Hikari resisted the idea. One day, when Taizo collapses due to exhaustion, Hikari is shocked to find out that her father has cancer and only has 4 days to live. In order to protect his factory, she decides to take on the role of company president. However, her husband who she is thinking of relying on to help her with the business, is sent to the US for an overseas posting. To make things worse, Hikari is seen as a president in name only and is belittled by the factory's executives, employees and their main bank. Co-stars include Yanagisawa Shingo, Murakami Jun, Oshinari Shugo, Kariya Shunsuke, Ichige Yoshie and Takenaka Naoto.

Uchiyama who will be acting in the leading role of a NHK drama for the first time, said that although she is worried and nervous, she is prepared to take on the challenge and show how a housewife manages a company with her unique perspective and finds out more about her late father through the process. As such, this is not just a business story but also one about a father and his daughter.