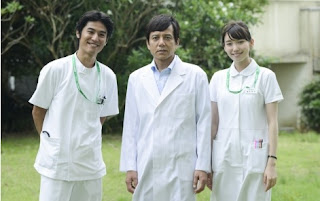 The spin-off drama "Doctor Y ~ Gekai Kaji Hideki ~ 2" which is from the hit TV Asahi drama series "Doctor X ~ Gekai Daimon Michiko ~" and features the surgeon Kaji Hideki (Katsumura Masanobu) as the lead, will be making a comeback from 26 September through au's Video Pass, Amazon Prime Video and TV Asahi Douga. This means that the spin-off series will be shown to more than 200 countries through the Amazon platform.

"Doctor Y" features Kaji who loves to be part of the herd, adores money, uses his skills to get what he wants and is narrow-minded. Last year, when the first spin-off series was shown via the Internet and later shown on TV, it showed how Kaji was sent to a hospital in the countryside and was bewitched and tempted by money when treating his patients but he always managed to achieve his aims in line with the main drama's theme of "never failing".

In the second series, he will be at Honokura Hospital which is surrounded by mountains and feels like a place which you would see in horror movies. There is a legend that the hospital is cursed by the spirit of a young girl. From the first night when Kaji reports for work, he goes through a harrowing and comical experience while continuing his stint as a surgeon there.

Katsumura commented that the staff and cast of "Doctor Y" are very serious about this drama and it has a variety of elements such as horror and medical drama. As such, he hopes that many people will be able to watch this drama. In the latest installment of "Doctor X", Kaji will not be appearing there so for people who miss Kaji, they should rest assured that he will be back in the Doctor Y spin-off drama.

Just like the first series, the main supporting cast will be largely young actors. In this latest installment, Horii Arata will be playing Nakata Kazuma who is the on-duty nurse in charge of supporting Kaji. Horii revealed that Katsumura jokingly told him that if he appears in "Doctor Y", he won't get to appear in "Doctor X" which led Horii to exclaim that he hopes to act in "Doctor X" as well. As he tends to stumble over the medical jargon, he will try to practice tongue twisters so that he can overcome this problem. Iitoyo Marie will be playing a nurse Shimizu Reiko and expressed anticipation at being able to work with Katsumura for the first time.

Other co-stars include Hoshida Hidetoshi, Noguchi Kaoru, Tokui Yu and Iwamatsu Ryo. Yonekura Ryoko and Kishibe Ittoku will be making guest appearances in the spin-off drama as well.