Nakamura Shido announces his return to work and his wife's pregnancy 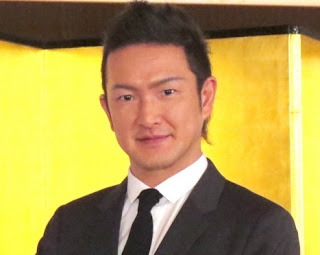 Nakamura Shido who announced on 18 May that he was suffering from an early stage of lung cancer, held a press conference on 28 July to reveal that he will be participating in the autumn performances of Shochiku's kabuki plays starting from 1 November. Nakamura revealed that he went through surgery in late May and was discharged from hospital on 6 June. As the press conference was his first public conference since his discharge, Nakamura thanked everyone for their concern and said that he is doing well and has recovered. The only thing which was tough during the treatment was having the catheter inserted into his body but the nurses were skillful and made it more bearable for him. He even jokingly remarked that he went back to visit the nurses a while after his discharge.

Nakamura also thanked his wife Saori for her support during his recuperation when she made a lot of healthy food and juices for him. As for recent media reports about her pregnancy, Nakamura said that he didn't have the intention to reveal the news so early and wanted to do so during this press conference but had to admit it much earlier when the reporters came to verify the story with him. He revealed that she is already 5 months' pregnant and both mother and child are doing well.

Nakamura said that the couple found out about the pregnancy just three days before he was diagnosed with cancer. However, thanks to his wife's presence, Nakamura was bent on not moping over this and expressed his gratitude to her for suggesting that he go for a check-up thus leading to the early discovering. As for the gender of their baby, Nakamura said that Saori knows about it but he asked her not to reveal this to him as he wants it to be a surprise until the baby's arrival. He commented that his only hope is that the baby will be healthy by the time he or she is born in late December.

As for his health condition, Nakamura is undergoing daily sessions lasting 2 hours either at the gym or going out for strolls. He estimated that he has recovered about 70 to 80 percent of his previous fitness level and his muscle mass has increased thus making his weight go up by 3kg as compared to before his operation. Although the kabuki performances will only take place in November, he is expected to do some narration work by the end of July.

Nakamura expressed his thanks to Ichikawa Ebizo who congratulated him on the impending arrival of a new family member. Despite things being tough for Ichikawa of late due to the demise of his wife Mao, Nakamura was touched by his care and concern for his health even in such circumstances. As such, he hoped that they can continue to work hard together in future and make the kabuki world even better.