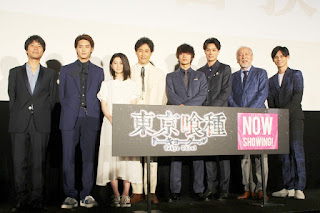 The first-day-screening event of new movie "Tokyo Ghoul" was held at Marunouchi Picadilly on 29 July which was attended by the director Hagiwara Kentaro and cast members Kubota Masataka, Suzuki Nobuyuki, Sakurada Hiyori, Ooizumi Yo, Murai Kunio, Ogasawara Kai and Shiraishi Shunya.  The movie is based on the same-titled manga by Ishida Sui and features Kubota as the lead character Kaneki Ken while the heroine Kirishima Touka is played by Shimizu Fumika. In Tokyo where ordinary people and ghouls who look like humans but need to eat human flesh in order to survive live together. While on a date with a ghoul Rize (Aoi Yu), Kaneki is attacked by Rize which results in him being sent to hospital for surgery using her organs. When Kaneki recovers, he discovers that he has become a half-ghoul and must cope with the changes in his body while from keeping the truth from the people he loves and his friends and evading the pursuit of CCG i.e. Commission of Counter Ghoul, the government agency which deals with crimes related to ghouls.

As the screening began from 7.45am which was the earliest slot of the day, Kubota greeted the audience and thanked them for making the time and effort to support them. He expressed his hope that they would be able to hear the audience's feedback although the realisation of his movie finally being released hadn't sunk in completely. When Ooizumi started joking that he usually is in the shower at such an early time in the morning and he was amazed how the audience could show up for such an early screening, Kubota tried to stop him from rattling on but to no avail.

Reflecting on the filming, Kubota said that it was a tough time for them as they had to spend a lot of time on each and every scene especially on the CG parts. He also expressed his gratitude to Ishida who was very approachable and communicated with him via LINE where Kubota felt Ishida's strong love for his work. Due to Shimizu Fumika's retirement saga in February this year, she was absent from the event. The director Hagiwara remarked that it was about one year ago when they filmed the movie and there were so many happenings along the way so he was truly happy that the movie was finally released. As this movie involved many people, he hoped that the feelings and efforts put in by everyone will come across to the audiences who watch the film.

The author Ishida drew portraits of the cast members and gave them as a surprise present. Ooizumi expressed his joy at receiving the gift but went back to his funnyman side by joking that he will display this as his portrait at his own funeral. Kubota had received his version earlier than the rest on 10 July which was when the Japan premiere event was held. However, as the portraits for the other characters were revealed one by one, Ooizumi started to "complain" that the quality of his portrait seemed to pale in comparison with the rest and wondered aloud whether this was because his character Mado Kureo was not good-looking. Upon hearing this, Kubota teased Ooizumi for being too frank and saying whatever comes to his mind.