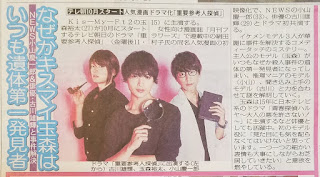 Tamamori Yuta, Koyama Keiichiro and Furukawa Yuki will be starring in the upcoming TV Asahi Autumn 2017 drama "Juuyou Sankounin Tantei" (Important witness detective) which will begin its run from October in the Fridays 11.15pm timeslot. The drama is based on the same-titled manga by Kinuta Murako which is currently being serialised in "Gekkan Flowers". This will be the first time that the three actors are working together in the same drama.

Tamamori plays the lead character Maneki Kei who is a model. By a strange stroke of fate, he always becomes the first person to discover the body at a murder crime scene and is constantly seen as a suspect due to the uncanny coincidence. Koyama plays Suou Itsuki while Furukawa plays Simon Touma who are also models and join Kei in solving these murder cases in a comedic and straightforward way.

Tamamori commented that as he is playing a model this time, there is a need to pay more attention to his appearance as compared to his past roles. He hopes that the three of them will work well together for the viewers to support them in their quest for the truth behind the murder cases. As for Koyama, it has been 5 years since he last acted in a drama series so he's excited about this drama which he views as a challenge to himself. Meanwhile, Furukawa commented that he doesn't see anything similar between him and his character Simon so it is very challenging for him especially since Simon is a model with a good figure but he himself has no muscles to speak of. As such, he plans to head to gym to do training so as to look convincing for this character and hopes to show his progress as an actor through this drama.

Reflecting on the trio's first meeting, Tamamori remarked that he could tell right away that Furukawa is shy in front of strangers like him so it naturally became Koyama's duty to liven things up. Koyama expressed his wish for the three of them to become closer over time so that they can show off good teamwork during the filming.