Dean Fujioka to star in new movie "Umi wo kakeru" 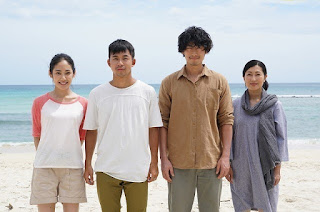 Dean Fujioka will be starring in the new fantasy movie "Umi wo kakeru" directed by Fukada Kouji based on an original story and is jointly produced by Japan, France and Indonesia. The movie will be released in Japanese cinemas from May 2018 and screened in Indonesian cinemas after this. Filming began from 5 August at Banda Aceh in Indonesia and will be done entirely there.

Fujioka plays a mysterious man who appears on the shore of Banda Aceh and can only speak bits of Japanese and Bahasa Indonesia. He is discovered by a Japanese woman Takako and her son Takashi who are there to help with disaster recovery efforts as the city is still struggling with the aftermath of war and the tsunami in 2004. They nickname the mysterious man as Laut which means sea in Bahasa Indonesia and take him in. However, this marks the beginning of various strange happenings around them. Tsuruta Mayu will be playing Takako while Takashi will be played by Taiga. Takashi's cousin Sachiko will be played by Abe Junko. Indonesian actors Adipati Dolken and Sekar Sari will also be part of the cast.

Fujioka commented that to him, Indonesia is a country dear to his heart since his family is living here and he regards it as his second hometown. He described the director as someone who's very detailed and meticulous as they will go through numerous rehearsals just to get the scenes right and he could see how much Fukada loves movies. Fujioka remarked that he learned a lot during the filming and had a great time. With regard to his character Laut, he said that the character is a very unusual person who may seem like a human being at times but appears otherwise too when he causes various strange happenings. The story is rather challenging and interesting and also incorporates cultural elements from both Japan and Indonesia. As such, he hopes that everyone will enjoy watching this unique film regardless of their nationality, age or languages they speak.