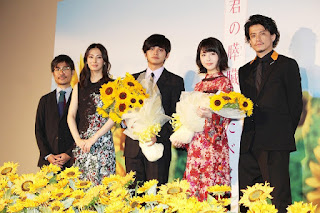 The first-day-screening event of new movie "Kimi no suizou wo tabetai" was held at TOHO Cinemas Roppongi Hills on 28 July which was attended by the director Tsukikawa Sho and cast members Hamabe Minami, Kitamura Takumi, Kitagawa Keiko and Oguri Shun. The movie which is based on the same-titled bestseller novel by Sumino Yoru which was ranked No.2 in the 2016 Honya Taisho, is set in two time frames. Hamabe and Kitamura will be playing the past of the leads while Oguri and Kitagawa will be playing characters in the current era. The story features the heroine Yamauchi Sakura (Hamabe) who is suffering from a serious illness in her pancreas and the only person who knows about her illness is the lead character "Boku" (I) who is Sakura's classmate (Kitamura). As the story shuttles between the past and present spanning 12 years, it talks about the death of people dear to you and how feelings are conveyed through something more than words. 12 years later, Boku (Oguri) becomes a teacher at his alma mater while Kitagawa plays Sakura's best friend Kyoko who is about to get married.

Hamabe revealed that she was very nervous about this important day and that her legs were shaking so much that she found it difficult to speak. Kitamura also echoed her view and said that he felt the same tension when people congratulated him on the opening of the movie. However, he didn't know how to respond since this was his first leading role in a movie. Oguri then said that he will focus on promoting this movie since it had already been two weeks since the release of his other movie "Gintama".

During the event, there was a surprise video clip of Hamabe and Kitamura's promotional tour to various places spanning a total 11,510km and over 205 hours with the theme song "himawari" by Mr.Children being played in the background. Hamabe was at first embarrassed when she saw the video and her eyes were filled with tears by the time the video was finished. She remarked that upon seeing the video, she was reminded of the warm support of those who came for the promotional events while Kitamura said that he was in danger of crying too and thanked the staff for helping them on this promotional tour.

Kitagawa commented that she was surprised by how far they had gone to promote the movie and that she was also touched when she heard the theme song while watching the video. As for Oguri, he joked that he wouldn't have wanted to spend 205 hours on the promotional tour because it was just too long for him to bear. The director Tsukikawa praised the two leads for having matured a lot in the last few months after interacting with so many people during the promotional tour.

At the end of the view, Kitagawa and Oguri presented bouquets of sunflowers to Hamabe and Kitamura respectively. Kitamura said that he was very happy to be able to play the same character as Oguri and pledged to continue making good movies with the cast and staff of his future works. As for Hamabe, although she felt that she was still immature and insecure about herself, she was grateful to be able to come across this movie thanks to the warm support of everyone.

Email ThisBlogThis!Share to TwitterShare to FacebookShare to Pinterest
Labels: Kimi no suizou wo tabetai, Movie News