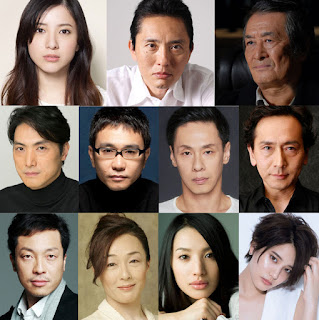 The supporting cast line-up of new movie "Kensatsugawa no Zainin" has been announced. The movie is based on the 2013 novel by Shizukui Shusuke and will be directed by Harada Masato. Filming began from 12 July this year and is expected to be wrapped up by early September. The movie will be shown in cinemas next year.

The story features Ninomiya Kazunari as a newbie prosecutor Okino Keiichiro who has a strong sense of justice and is sent to work at the Tokyo Public Prosecutors' Office with an elite prosecutor Mogami Takeshi (Kimura Takuya). When a murder case is assigned to their department, Okino and Mogami develop different views about the case. It is revealed later that the suspect in this case happens to be the same suspect in a murder which had passed its statute of limitations. Mogami is bent on not letting this suspect off the hook again as his inability to put him to justice in the past caused the death of a person who was important to him. This causes Mogami and Okino to clash especially when Mogami tries to overstep his authority as a prosecutor and Okino has reservations about the biased manner in which his senior is conducting the investigation.

Yoshitaka Yuriko will be playing the heroine Tachibana Saho who is an admin officer in the prosecutors' office. Due to an incident when she was a child, Saho resolved to become an admin officer and realised her dream with her tough resolve. Matsushide Yutaka will be playing Suwabe Toshinari, a broker of the underworld while Yamazaki Tsutomu plays Shirakawa Yuuma who is a big-name lawyer known for his strong belief in human rights. Ookura Koji will be playing Yumioka, the suspect in the murder case and Hira Takehiro will be playing Danno who is Mogami's former classmate and a member of parliament. Yashima Norito will be playing a lawyer Odajima who works with Okino in this case. Other co-stars include Yajima Kenichi, Otoo Takuma (TEAM NACS), Kimura Midoriko, Ashina Sei and Yamazaki Hirona.