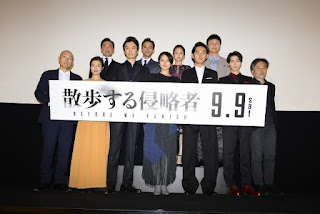 Matsuda plays the role of Kase Shinji who has the habit of going on daily walks every evening but disappears without a trace for a few days. When he returns home, it is as if he has become an entirely different person which makes his wife Narumi (Nagasawa) shocked at his changes especially when he becomes very gentle and nice to her. Suddenly, Shinji tells Narumi that there will be an attack on Earth which is then followed by a series of strange happenings such as the mass killing of a family in the town they live in and the happening of weird events that disrupts the peaceful life they once had. Hasegawa plays the role of a journalist Sakurai who follows the "invader" around as part of his job.

The tickets for the event were snapped up in a mere 15 seconds which led Nagasawa to express her joy at the support shown for their movie. Maekawa remarked that when they staged the play 12 years ago, only 100 people came to the small underground theatre in Shinjuku so he was especially touched to see so many people here to watch the movie. Kurosawa also commented that when he first had the idea of making the play into a movie about 8 years ago, there was a lot of trial and error along the way before they could finally make this movie so he expressed confidence at the outcome which was thanks to their strong conviction in seeing this through.

Nagasawa commented that as her character Narumi is angry throughout most of the movie, she needed a lot of energy to play this character. In response, Matsuda who plays Shinji, the person she's always angry at, remarked that she was so frightening that he could actually immerse himself into playing his character .

In line of the movie's theme of how the aliens are trying to rob the human beings of their character traits, Mitsushima commented that he would like to take away Matsuda's calmness and see how the latter would behave like if he loses his cool. Especially since they did the filming in summer and had to wear leather jackets, he could not understand why Matsuda appeared unaffected by the heat. On the other hand, Matsuda revealed that he's actually experiencing a lot of emotions within which don't get conveyed to other people despite his cool facade.