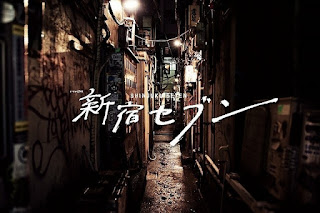 KAT-TUN's Ueda Tatsuya will be starring in the new TV Tokyo Autumn 2017 drama "Shinjuku Seven" which will be starting from October 2017 in the Fridays 12.12am timeslot. This marks Ueda's first leading role in a drama series and he will be singing the theme song as a solo singer. The title of the song and the CD release date will be announced at a later date.

The drama which is based on the same-titled manga currently serialised in "Manga Goraku Special", is set at Kabukicho in Shinjuku where the lead character Nanase (Ueda) owns a pawnshop and is known for having a keen eye to determine whether an item is the real thing or a fake and its value. While appraising these items, he also gets involved in various incidents and trouble due to his clients. This will also be one of the rare instances where a TV Tokyo drama will head overseas for filming.

With regard to his first leading role in a drama series, Ueda said that he will do his best as always and he is very happy and honoured to be able to achieve his goal of landing a leading role one day as he likes acting. As for singing the theme song on his own, he believes that this will help him to grow as a singer while his group is currently on hiatus so he will put in his best effort for this as well. Ueda also hoped that this song will make viewers become more absorbed and engaged in the drama.

As Ueda had already read the manga before, he described his character as someone who you would not consider as a good person but he has a strong conviction towards things he believes in and would not do anything which goes against this. As such, he had always wanted to play a character like this and show everything that he's got through his acting. With regard to the action scenes, Ueda said that he's looking forward to it and will do any stunt for this drama while tapping on his boxing experience of more than 10 years. However, as Nanase's build is slightly different from his figure, Ueda revealed that he was instructed by the director to increase his weight so that he can resemble Nanase more.

Filming is said to be starting soon.

Oh my God, YES! I miss him so much and hear him sing and everything! thank you for the info