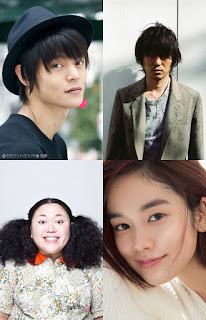 Kubota Masataka, Arai Hirofumi, Enoue Keiko and Kakei Miwako will be starring in the new movie "Kenen" directed by Yoshida Keisuke which will be released in February 2018. The title of the movie literally means dogs and monkeys i.e. people who are on bad terms. Filming had been wrapped up recently.

The story which is based on the themes of envy, jealousy and hatred between family members, features two pairs of siblings who are on bad terms with each other. Kubota plays the role of Kanayama Kazunari who is a good-looking, honest and serious salesman of a publishing company but his elder brother Takuji (Arai) is the exact opposite i.e. a troublemaker who doesn't give a damn about anything and is just out of prison. On the other hand, Enoue plays the elder sister Ikuno Yuria who takes care of the family printing factory business and is secretly in love with Kazunari while her sister Mako (Kakei) is pretty and works as a gravure idol while helping out at home but is not very smart.

Kubota who is the youngest in a family of three brothers, said that there were many things in the story which he could identify with. He also commented that although Yoshida's directing style and storytelling seemed to be reflecting the mundane daily life, he was surprised by how the one's true feelings which are normally hidden, are revealed through the acting and conversations. As such, he had to engage in discussions with the director as it was difficult to grasp the fine balance needed to play his character. On the other hand, Arai joked that it would be difficult to convince people that he and Kubota are brothers because they look too different.

Enoue commented that it was easy for her to understand the feelings of Yuria as the story progressed and she was glad to be able to take on this role for her debut movie. As for Kakei, she expressed her joy at being given a chance to take on this movie and tried her best with the intention of improving as an actress.