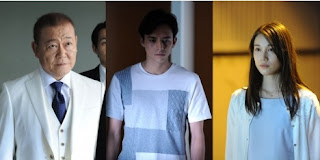 Kunimura Jun, Mitsushima Shinnosuke and Nakamura Yurika will be appearing in the upcoming TV Asahi drama SP "BORDER 2 Shokuzai" which will be shown later this year. The SP continues from the end of the 2014 drama series where Ishikawa Ango (Oguri Shun) gets too caught up in his pursuit of justice that he pushes a criminal Ando Chikao (Omori Nao) over from the rooftop of a building. Although Ando is supposedly dead due to the fall, he appears suddenly behind Ishikawa and grabs his shoulder to welcome him to the other side of the world i.e. evil. Besides Oguri, the original cast members including Aoki Munetaka, Haru, Endo Kenichi, Furuta Arata, Takito Kenichi, Nomaguchi Toru and Hamano Kenta and guest star Omori will be back in the drama SP.

Kunimura plays the role of Kudaka Takeshi who is the auditing commissioner in the Metropolitan Police Department who is capable and honest but has a somewhat mysterious and unfathomable side that places him at odds with Ishikawa. Mitsushima plays Haraguchi Tomoyuki who is a person of interest in a case investigated by Ishikawa while Nakamura plays Sudo Mami who is the victim of a murder case and appears as a spirit in front of Ishikawa. Mitsushima said that he is looking forward to be able to face off with Ishikawa i.e. Oguri and wonders how his character will appear in the SP. As for Nakamura, she admitted that she's actually quite afraid of the supernatural but had new thoughts about the spirits after reading the script as she pondered over why her character insisted on staying on as a wandering spirit and reach out to Ishikawa.