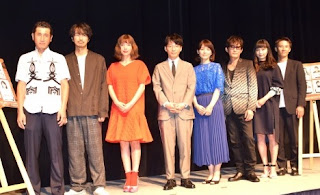 Hoshino will be playing the 32-year-old lead character Yoshimura Takao, a sales department salaryman at a travel agency who dabbles in stimulants out of fun which then leads to his arrest and dismissal by his company. To make things worse, the apartment where he lives at goes up in flames by accident. Having lost his job and place to live, Takao goes to live in the sharehouse Plage which takes in people with various backgrounds who are striving to regain their former lives or content to stay in a corner of society. Although Takao resolves to restart his life, he gets embroiled into the controversies and troubles involving the tenants there.

Hoshino revealed that he received the offer for this drama last summer and watched the final version yesterday. Although his character is on the silly side, he called upon viewers to pay attention to how his character changes as he interacts with the people around him. In line with the drama's theme about people's past sins, Hoshino commented that he has set a goal of not pushing himself too much this year which has made him miss the editorial deadlines for his articles more often than he usually does. Although he always expects himself to miss the deadline, he jokingly said that he tries to make sure that it's within an acceptable range as he doesn't want people to get angry at him.

As for Sugashikao who is making his debut as an actor in this drama, he confessed that he didn't know many things on the set and had to be taught by his co-stars who are experienced veterans. For example, Hoshino taught him how to memorise his lines while Ishida taught him how to turn around to face the camera. He also tried to observe everyone's rehearsal sessions so that he could learn a thing or two from them. Ishida chipped in to say that Sugashikao is a very keen learner and would keep asking questions so as to make his performance better while Hoshino revealed that Sugashikao's character will be very fantastic in the last episode. Upon hearing this, Sugashikao was embarrassed and told them to stop talking about such things.

Ishida who plays the sharehouse owner Asada Junko, said that her character is filled with so much motherly love that she is hardly similar to her. However, Hoshino whispered to Ishida that she is not as bad as she thinks which made her thank him with a smile.

The cast also revealed how they gathered around in one of the rooms of the house which was used for the filming during their filming breaks and chatted over meals and snacks. However, due to the flooring which gave out creaking sounds whenever they moved, everyone had to tiptoe and move around cautiously so as not to make too much noise which could affect the filming taking place on the first floor.