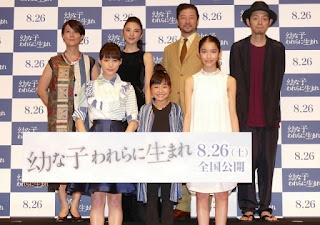 The completion screening event of new movie "Osanako warera ni umare" was held on 2 August which was attended by the director Mishima Yukiko and cast members Asano Tadanobu, Tanaka Rena, Kudo Kankuro, Minami Sara, Kamata Raiju and Arai Miu. The movie will be released in cinemas from 26 August.

The movie which is based on the 1996 same-titled novel by Shigematsu Kiyoshi, features Asano as the 40-year-old once-divorced lead character Tanaka Shin who remarries Nae (Tanaka), also a divorcee. Together with her two children from a previous marriage, Shin tries to forge a bond with them but is met with especially strong resistance from Nae's elder daughter Kaoru who keeps wanting to meet her birth father i.e. Nae's ex-husband Sawada (Kudo Kankuro) despite the fact that the latter was physically abusive towards Nae and didn't take care of his family. On the other hand, Shin has a daughter Saori from his previous marriage to Yuka (Terajima Shinobu) who later remarried an university professor and moved to the US. Despite being physically apart from Saori, Shin tries to show his love for Saori by meeting her regularly which makes Nae feel uncomfortable. When Nae finds out that she is pregnant with Shin's child, the couple have to grapple with the difficulties that come with forming a new family unit and their conflicting feelings towards each other's previous spouses and their children from the previous marriages.

Asano commented that it was a meaningful experience to participate in this movie where he got to be so absorbed in his role and clash with the director with his unyielding attitude about his acting. Especially since this was a difficult character since Shin couldn't devote himself fully to his past or current family, it was a refreshing challenge for him. Mishima revealed that they did not force the cast to stick to the script or prescribed actions but rather made adjustments on the set and tried to complete the scenes in one take so as to make the characters come to life. Tanaka also said that she was surprised by how different she appeared in this movie and credited Mishima for bringing out this new self of hers.

Kudo who plays an abusive husband, commented that his character is a rather terrible man so he's concerned that the viewers will come to hate him and called upon them not to do that. Although he doesn't identify with his character, Kudo said that it was fun to say things which had never crossed his mind.